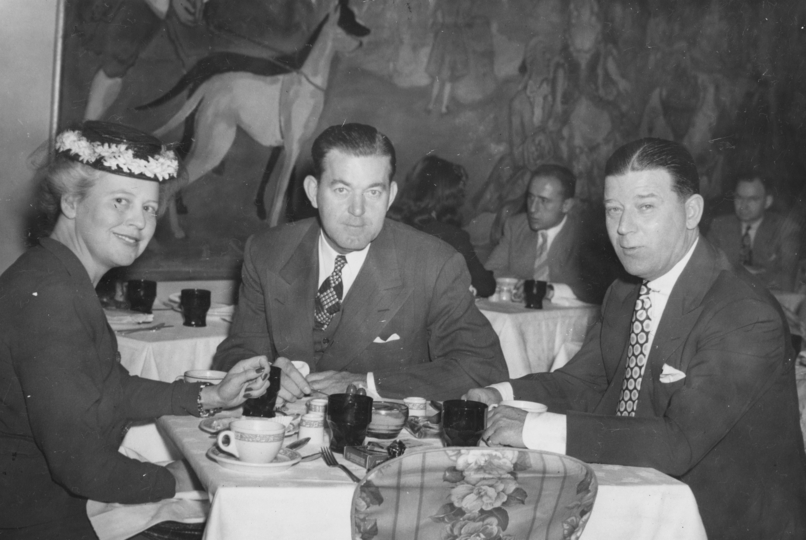 Popular history has it that Joseph D. Nunan Jr., former IRS Commissioner (pictured right), did a 5 year stint in prison for not properly reporting earnings from an $1,800 wager. “What was the bet?”? You might ask. Simply put, Nunan predicted one of the greatest presidential election upsets in U.S. history. But that’s not exactly what put him behind bars.

The year was 1948. The U.S. was in the beginning stages of the Cold War, and incumbent President Harry S. Truman was fighting for re-election. Popular opinion, which was supported by polling and political punditry at the time, had New York Governor Thomas E. Dewey easily winning the presidency.

However, on election night that was not the case. Truman cruised to victory, winning one of the biggest presidential upsets in U.S. history. He’s depicted above just after winning re-election, holding a Chicago Daily Tribune which incorrectly projected the results of the election.

So what does this have to do with Truman’s former IRS Commissioner Joseph D. Nunan Jr.? Well, of all the charges he faced, the one that passed the test of time was his failure to report an $1,800 wager which predicted Truman’s re-election.

A History of Tax Evasion

To say that an IRS Commissioner was convicted and sentenced to prison for failure to report $1,800 in gambling winnings is laughable. However, this anecdote is treated as historical fact.

Although factual, the underreporting of $1,800 was just one item on the laundry list of charges brought against Nunan. The charges of tax evasion stemmed from a history of unsupported deposits and withdrawals which Nunan claimed was not taxable income.

According to the investigation:

Nunan claimed that, fearful of the failure of his bank, he had withdrawn $170,000 in March of 1933. Conveniently enough, the bank’s ledger was destroyed for the years prior to 1937 and there was no way to validate this transaction. According to Nunan, The money was kept in a locked box in his home and was subsequently deposited piecemeal into his account from 1946 to 1950.

To dispute these claims, the IRS detailed line by line the numerous errors in Nunan’s tax returns from 1946 to 1950, which included:

What ultimately sealed his fate was the constant showcase of incompetence. He claimed he had no personal books or records, employed no accountant or other person to assist him in the preparation of his returns, and insisted that no other person had knowledge of the basis for the various amounts stated therein.

One might assume that as a lawyer, Collector of Internal Revenue, and as Commissioner of Internal Revenue he would have a fluent understanding of tax law. However, required schedules and details plainly printed in the instructions were completely disregarded and omitted.

He went as for as to deny that he was a tax expert and said he became a federal revenue officer only by “the chance of politics.” Although he led the agency that would eventually investigate him for tax evasion he claimed that he was simply a political lawyer and a businessman. Lastly, when the investigating Revenue Agents pointed out the difficulties caused by his lack of any sort of personal records and asked him for a net worth statement, he refused to give it.

Although it’s anecdotal to say that Joseph D. Nunan Jr. was prosecuted and convicted of tax evasion due to his failure to report an $1,800 wager, it’s simply incorrect. His failure to report such winnings was just a fraction of the underreported income. All in all, investigators claimed that Nunan evaded paying over $90,000 in taxes in that 5 year period.

Due to his failure to cooperate with investigators and his perceived blatant incompetence, a jury had no doubt in pursuing criminal charges. Nunan was ultimately convicted and sentenced to 5 years in prison and paid a $15,000 fine. Nunan would be disbarred and would forever be remembered as the IRS commissioner who went to jail over an $1,800 bet.

3 comments on “Did an $1,800 Bet Land This Former IRS Commissioner in Prison?”