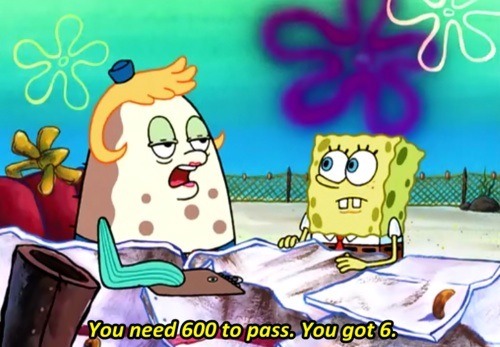 For anyone who has taken the CPA exam, know someone who’s taken the CPA exam or thought about taking the CPA exam you probably already know that it’s hard; like really hard. The average pass rates for any of the 4 sections of the examination hover around 50%. This means that half of the people who take the exam at any given time will fail. So given this statistic, the odds of failing at least 1 part of the exam is extremely high. Even more so, the odds of passing all 4 parts of the exam on the first try is extremely low. But I know what you’re thinking, “you probably didn’t have to work or weren’t taking classes at the same time.” Actually, I was able to pass all four parts of the CPA exam in less than one year while working full time and taking MBA classes at night. Even crazier, I passed 2 parts of the CPA exam during busy season.  So how did I do it? Let me show you through Spongebob memes.

This is the most important step: seriously, invest in some CPA software. I personally enjoyed Becker but there are several programs out there. Becker is one of more expensive programs there is but it is definitely worth the money. For more cost conscious candidates I would recommend Wiley or other regularly used self study software. Do your research and pick the one that fits your budget and your needs.

The fastest way to fail the CPA exam is not leaving enough time to study. Most people’s study schedule for the exam involves heavy amounts of cramming and last minute studying. Since I was taking classes full time and working full time I only had an hour or two per day to study. I scheduled out my days so that I would study at least 1 hour per day, everyday. This meant that I had to strategically designate certain times for CPA prep which kept me on a regular schedule. I found that studying for more than two hours in a day was not efficient anyway because the typical person’s attention span can’t last a few minutes let alone a few hours. Break up your study schedule into micro sessions instead of cramming sessions and you’ll see the difference. I took 2 sometimes 3 months to study for an exam and went over all the material several times. I wanted to make sure I was going to pass each part on the first try every time.

The number one excuse most CPA candidates give for why they didn’t study enough is, “I didn’t have enough time.” For most candidates this is not a valid excuse. There are more than enough hours in a day to fit at least one hour of CPA prep into your daily schedule. I can’t tell you how many times I hear this complaint from a CPA candidate followed by an update of the series finale of The Walking Dead, Orange is The New Black, Game of Thrones, Power, Billions, The Voice, American Idol…. so on and so forth. Once you pass all 4 parts you can binge watch shows for an eternity.

The biggest mistake I see most CPA candidates make is scheduling the exam before they even start studying. I found that each test I took required different amounts of study time; I was able to study for BEC in a month while it took almost 3 full months to fully prepare for FAR. If I scheduled the test before I started studying I would have ended up over studying or worse, cramming. Additionally, scheduling the exams after I finished all the course material allowed me to spend the final weeks reviewing instead of prepping for the exam. I went into each test with confidence which reduced my nerves and increased my focus on test days.

What I Learned In Boating School Is

As a recap, what I learned in boating school is…

Remember, once you get your CPA you have it for life. Eat dirt for a year and then binge watch Netflix for the rest of your life.

2 comments on “How I Passed All 4 Parts Of The CPA: On My First Try”